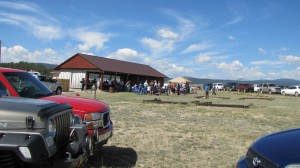 Today was a great day for a picnic and there was a nice group of nearly 200 people who turned out for the RORA Annual Meeting and Ranch Picnic.

The meeting moved along in good order and prior to adjourning the meeting, three of our four candidates (one was unable to attend due to family commitments) for the board, had an opportunity to say a few words to the group. The meeting was adjourned and Darryl Atherton took charge of introducing our guest speakers, all of whom, we would like to thank for taking time out of their busy days to address the membership .

We had the opportunity to hear from Park County Sheriff, Fred Wegener, who graciously answered many questions for folks in the audience (not all the answers were what folks wanted to hear, but all were what they needed to hear). 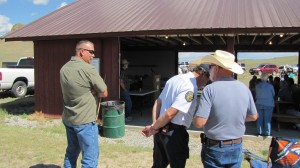 Chief Jay Hutcheson, of the Hartsel Fire Protection District presented much information on HFPD activities, Ranch members and goals here on The Ranch.

Maria Mitchell, Director of 9-1-1 Communications & Dispatch, for Park County shared much information from her department, particularly regarding ?Code Red? and the reverse 9-1-1 system.

Mark Lamb,? of Colorado Parks & Wildlife, presented his educational and entertaining information on living with wildlife in Park County and here on the Ranch. 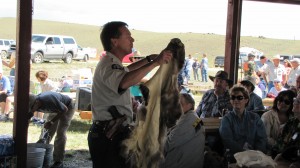 Upon completion of Mark?s presentation, we announced the winners of the election.? The new directors for a three year term are Richard Chambers and Brenda Whelan.? I would like to say thanks to each of the four candidates for offering up their time and efforts to our community.? I congratulate the winners and wish them productive and successful terms on the board.

We then proceeded to partake of an absolutely wonderful picnic dinner.? I would like to say thanks to Darryl and all the folks who helped in the preparations and serving of the pig (barbecued on the new Ranch grills) and all the terrific dishes that folks brought to the pot luck portion. 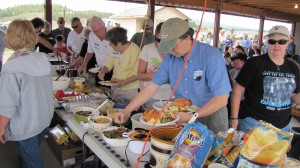 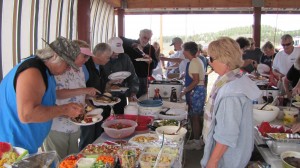 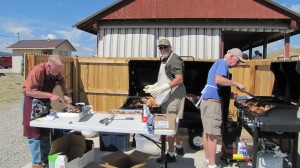 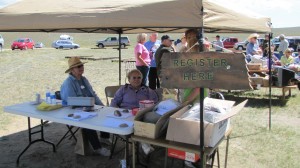 John Adams, auctioned off numerous items from the White Elephant Table (including Linda?s lawn chair, which she had inadvertently leaned against the table while getting a refreshment).

I?ll conclude this update by stating that I believe everyone had a good time and anyone who left hungry, it was their own fault!? If you didn?t attend, you missed out on a lot of good information and great food and you should make a special effort to try and be at the event next year.