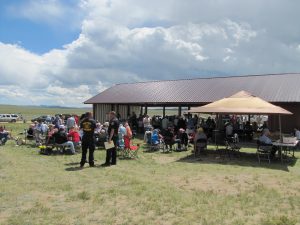 Hi All, I am posting some of the information about the annual meeting and picnic.  I would like to start by saying that I wish we could have had a more meaningful discussion about the community center survey, but unfortunately our time was used up by some participants who would not adhere to the rules and disrupted the discussion.

That, being said, I believe the rest of the meeting went according to plan and after adjournment, the rest of the picnic was enjoyed by the great turnout.  I would like to say thanks to Ed, Nikki, John and all the volunteers who helped them, for all their hard work in organizing the guest speakers, preparing the food and the setup and cleanup work.  I also appreciate the participation of all the guest speakers.

There are people who have asked about the vote numbers and here they are.

Three candidates were present to speak to the members prior to the closing of the balloting:

As a result, Dave and Gary became members of the board.  After the election, the then president, Tom Wells, requested a special meeting of the board of directors on August 19, 2017, for the purpose of allowing the directors to elect new officers prior to the next regularly scheduled board of directors meeting (September 9th, 9am at the office).

On August 19th, the board met at the office to elect the officers.  While going through the process, one of the directors, Ed Hart, with 2 years left in his term, chose to resign from the board.  According to the RORA bylaws, the board then chose to appoint, Dennis Ann Strong, who was present at the meeting, to replace Ed as a director for the remainder of his term.

I would like to say thanks to Suzan and Jeff, who’s terms had expired, and to Ed, for their service on the board.