Updates on the 20th

As summer is winding down I can smell autumn in the air.  The Aspen are starting to turn, outdoor projects need to start winding down and opportunities for Alpine hikes are getting numbered. I still have a couple  more I hope to get in before the winter snows.

We had a wonderful annual meeting and picnic. I think Niki Griffin, as well as all of her helpers; deserve a big “Thank You” for a job well done.  She is already starting to plan for the annual Christmas Party which the Board decided would be December 7th, the first Saturday in December. So put that on your calendar. More details will be coming out when we get closer.

Some things that need to be mentioned are:

Wood chipping this year in the Ranch will be the second week of October. Let the Fire Department know if you want to participate. You can call them at 719-836-3500. You will need to have your wood down by the road and a monetary donation to the Fire Department would be most appreciated. Volunteers do this and donations go to help the Fire Department.  The campfire permit requirement has been working quite well I’m told and they are on line now so all you have to do is go to the following web site to check if there is a burn ban and to log in your campfire.   https://hfpd.burnpermits.com/

John Adams has reported that he will try and keep the burn pit open as long as weather permits this year. He has a host of volunteers to man it.

November 1st  is the day that ALL campers need to be off of vacant lots,  including  popup campers. Once the snow flies it gets pretty hard to move them so keep that in mind.  If you intend to camp on your lot after November 1 you need to get a winter camping permit from John Adams in the Ranch Office.  Speaking of camping, the board has been made aware that at least one lot owner, and maybe more, has advertised their vacant lot for camping through one of the short term rental sites. As John mentioned in his monthly update, this is not allowed either in the ranch or the county. Both the Ranch and the county specify that camping by lot owners is permitted on their undeveloped lots but that is all. The Ranch is a residential subdivision and this type of activity is not allowed.  Many complaints have been filed with the Ranch and also with the county.  In addition, the county specifies that no more than two camping units are allowed on a vacant lot at any one time. This applies to the Ranch as well.  As an alternative, there are a significant number of campsites in Mushroom Gulch and all over the Four Mile Recreation area near the Ranch.  Many of these will support large groups of campers, they are free and you can ride your ATV’s and dirt bikes there legally and not be hassled or disturb your neighbors.  As a reminder, riding unlicensed off road vehicles in the Ranch is not legal as all of the roads are county roads.

Speaking of John, there have been many incidents lately where by people have been leaving 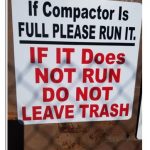 their trash either outside of the fence at the compactor or inside the fence but not in the compactor.  If the compactor is full, enter the code 1478 on the control panel to cycle it through.  The number is written on the control panel.  If it does not cycle through, notify John. But under NO circumstance should anyone leave their trash either inside the fenced in area or outside of the fenced area. That is considered littering. Also please do not open the compactor door when it is cycling. There is a high definition security camera in place that provides the Ranch with very clear video of who the offenders are. If you are one of the violators your security card will be turned off immediately and you will have to appear before the Board at a regular meeting and explain your actions before it will be turned back on. There have already been numerous members identified about this issue and two members already came to the last board meeting to see about getting their cards turned back on.  Both members indicated that because they saw other trash bags in the area and the compactor either was not working or was full they thought it would be OK to just leave their trash. It is NOT OK and that is why this is being communicated now, again.  There is a sign on the compactor that clearly says “DO NOT LEAVE TRASH” . This is one of the main benefits we get for our annual dues so let’s not abuse it.  There is also a very clear list of items that are not to be placed in the compactor. If you have any questions about something, contact John.

The reservoir will continue to remain closed until further notice. A new water sample will be taken and analyzed to see if it will sustain fish before the next Board meeting.  If so, then the Board is considering stocking a small amount of fish in the reservoir to see if they can survive. There will also be new sediment boxes constructed soon to replace the two that are quickly deteriorating. Some very selective upstream dredging work will also be conducted to try and reduce or eliminate the flooding that happens every year during spring thaw.

There is a new member who has been added to the Architectural Review Committee, Roger Metzinger. Thank you for volunteering Roger. Harry Schmid has been the chairman of the Architectural Review Committee for many years and will be leaving the committee. We thank you Harry for all your hard work. Also Janice Lehman has volunteered to take over as chairman for the Rules Enforcement Committee. Thank you Janice. These are two very important committees and they can always use more volunteers so give some thought to getting involved. 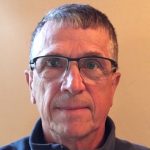 PrevPreviousUpdate on the 5th
NextUpdates on the 5th and 20thNext