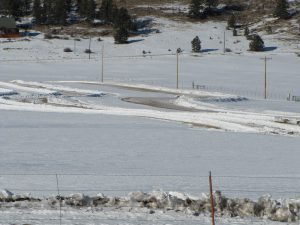 A bit has been noticed and commented on about the conditions and maintenance of the roads on the Ranch. So, with a little asking around in different places the following was learned.

Of all the subdivisions in all of Park County, The Ranch of the Rockies is the only one with both a full-time employee with road and bridges and the only subdivision with a piece of equipment devoted solely to the subdivision. Meaning the issues we face are faced by many, if not most residents in Park County and them with far less resources and attention. Further, the county starting pay for that position is $15.19 an hour. Working in retail or fast food in a more populated area or facing extreme weather for very close to the same pay, what would you choose? And often these drivers that have chosen the county job obtain some experience here in Park County and are able to go elsewhere for more money.

Some events that have affected us are the changes in the employees assigned to the Ranch. And with those changes there is the different approaches those employees take in maintaining roads. We are on our third road and bridges employee assigned to the Ranch in the past two months or so; the first of those, who had been assigned to the Ranch for a few years, took a daily maintenance approach, meaning they did that day what worked best for that day. Another constraint that driver had was in the past a local police officer lived in the Wagon Wheel area and so there was extra care given in that area so the police officer could get out. That officer has since moved and as had been noticed, Wagon Wheel has not been getting the extra attention they did in the past. That driver moved to a different area and we got the 2nd driver.

The second driver had been a state employee for about 30 years, was quite knowledgeable, and had his own approach to road maintenance. This was a long-term approach and focused on preventative measures. He spent a lot of time contacting the property owners of land adjacent to the ranch roads. Where he sought permission to construct the windrows (what he called snow traps) that helps prevent drifting on the roads. As has been seen, where he was able to construct the snow traps they have been effective. For various reasons some landowners did not grant permission and those adjacent roads have had more drifting to contend with. This second driver also was of the mind to get as much, if not all, of the ranch plowed before going back to give a previous area a second plowing. Another difference between the first and second driver was the first would keep the middle blade (called a mold board) of the road maintainer down whenever they were traveling on the Ranch roads. The second driver would keep the mold board up while en route to where he was going, unless it was needed to be down for a certain area. The second driver got to where he was going quicker and yet the first driver was always doing minor maintenance while traveling. The first driver took the machines he used here with him when be left. Leaving the second driver with very old, outdated, and in poor shape equipment. The second maintainer had close to 11,000 hours on it. In equipment, hours used is what is measured instead of miles driven as in passenger vehicles. 11,000 hours of use is very old, perhaps the equivalent of 400,000 to 500,000 miles on a car. This older machine also had a non-working turbocharger (among other mechanical failures) causing the machine to be far less capable of doing its job. The age of the equipment also meant a much more complex and harder to work piece of equipment. Think of the difference between a 1950s Ford pickup and a 2021 Ford Explorer. This issue of outdated equipment and the low pay scale is tied to the tax revenues here. We all likely enjoy the lower tax rates in Park County, yet this is part of the trade-off for those lower taxes.

The third driver has just started so we shall see what their approach is.

Some last observations: the washboard (some call it corduroy) on the roads is starting to emerge and speed is the major contributor of causing this effect. Also, mud and water holes are appearing. The water holes are usually due to clogged or frozen culverts and crews have been to some of these locations working to unclog them.

Further, the Ranch, its home owners association, and the elected board have nothing to do with the roads, the roads being county roads and managed and maintained solely by the county.

There is no magical solution, or quick fix; perhaps an understanding and appreciation of the constraints and conditions will be of benefit. A good understanding of one’s personal vehicle and its capabilities is an asset. Also, helping others is greatly appreciated and beneficial. For instance, where a more robust and capable vehicle has recently traveled makes that portion of road in better condition for other vehicles to navigate.